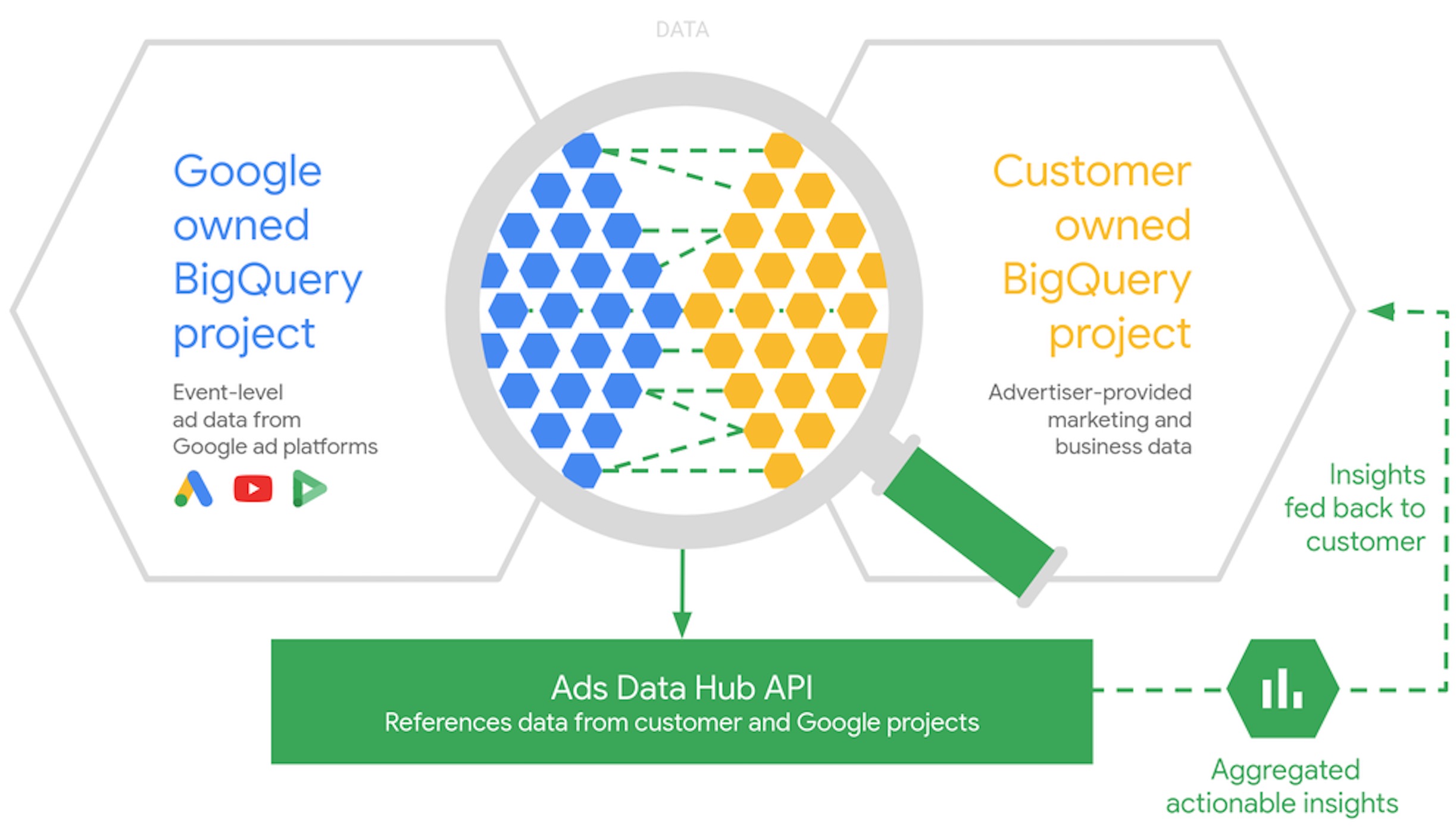 When Google officially announced it for the first time in May 2017, the Ads Data Hub did not get the attention required. In addition to choosing a quiet announcement due to the Attribution 360 and Audience Center 360 failures experienced recently by Google, it was also effective that the audience addressed by the product could not focus on another area while struggling with the GDPR uncertainty at that time.

Except for a few curious eyes in the past two years, there is still not much interest to the Ads Data Hub. Ads Data Hub has been in the “limited alpha” phase for two years and has an extremely limited use. Ads Data Hub, which some people consider as “another project that Google will send to the cemetery on the sly”, is firmly attached to life according to the latest developments shared by Google.

Before going into the details of “What is Ads Data Hub?”, answering the question “Where did this Ads Data Hub come from?” would be much more informative while understanding the subject.

GTM (Google Tag Manager) in data collection, GA (Google Analytics) in reporting and enrichment, Google Data Studio in visualization, Google Optimize in optimization and testing, and BQ (Big Query)/Google Cloud in analysis and big data could speak well enough with each other, and when Google Ads joined them, they were also the first choice of many digital professionals. And the block formed by the Campaign Manager, Display & Video 360 (DV360) and Search Ads 360, where the data is activated, could easily cope with the problems above the grid by creating a highly compatible ecosystem.

In this sparkling world, the data block called “log”, which is used for singularization, can be easily transferred between different platforms such as DMP, DSP (for example, Display & Video 360) and Ad Server (for example, Campaign Manager), so that it was possible to both provide singularization and to communicate at the impression level on all platforms of the data activation block. And this was also signaling two big opportunities for Google:

– Google Attribution 360: It did not take long for Google to announce Attribution 360, while the attribution concept, the crying wall of digital marketers that resist the years, was in high demand as always and while the doors of technological infrastructure were fully open. Along with this product, Google promised a dream-like attribution universe by including huge data available and adding platforms such as Offline, TV etc. to the equation.

While everything was going well and the biggest concern of Sundar Pichai appeared to raise the level of welfare of the Indian people, the fears turned out to be true. 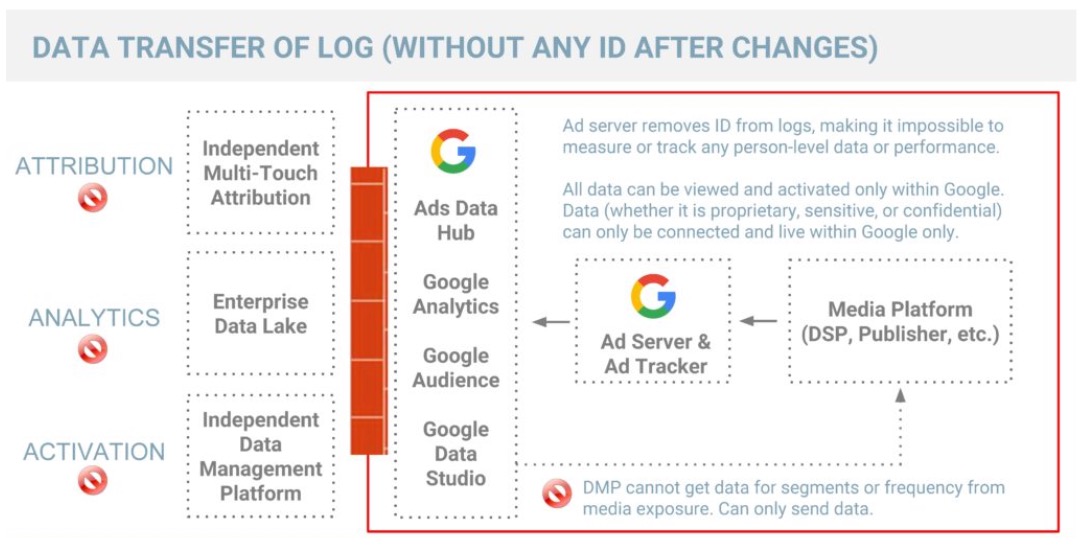 As GDPR regulations sharply banned the cross-platform transfer of log data, Google had simultaneously lost its remarkable capabilities of the existing GMP ecosystem, and had to watch its demise from the foundation of the Attribution 360 and Audience Center 360 projects, where it invested heavily and pinned its hopes on. In the future, Attribution 360 would be quietly buried in a corner in the Google cemetery, while the Audience Center 360 would retire its jersey number 360 and continue its way as the Audience Center under the DV360 leaving many of its abilities.

Before dealing with two lost products (but also two new markets), dealing with the live product GMP was the most logical option for Google.

According to 2018 data, 85% ($ 116 billion) of Google’s annual revenue ($ 136 billion) is ad revenues. In an era where the discussions of Ad Fraud emerged and the companies with the world’s most bulky digital advertising budgets repeatedly made statements that “We cannot invest more in digital in such an unsafe environment”, an ecosystem that could not offer a singularization and measurement was urgently needed to produce a solution.

The name of the solution was set as Ads Data Hub.

On May 24, 2017 (the day before GDPR decisions came into effect), Ads Data Hub was introduced unobtrusively.

The only thing we could learn with this introduction, which does not contain any information about the details of the product, was that Ads Data Hub was a cloud-based measurement tool and was started as a YouTube-specific project and later integrated into the GMP ecosystem.

It was April 27, 2018 with the following mailing when the term Ads Data Hub went beyond our blogs and entered our e-mails by Google, where the DoubleClick team summarizing the process as “GDPR tied our arms at some points but we are working on a solution called Ads Data Hub.” 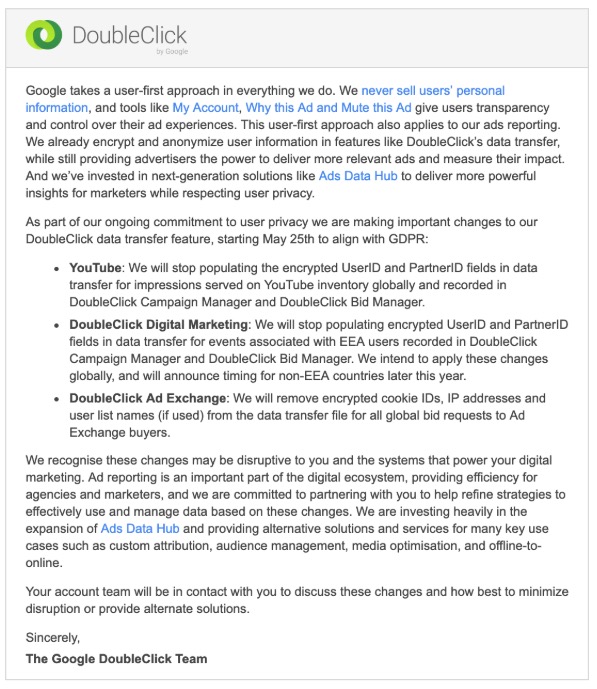 With Google to take its place on the developers’ pages, the details of the Ads Data Hub gradually revealed. 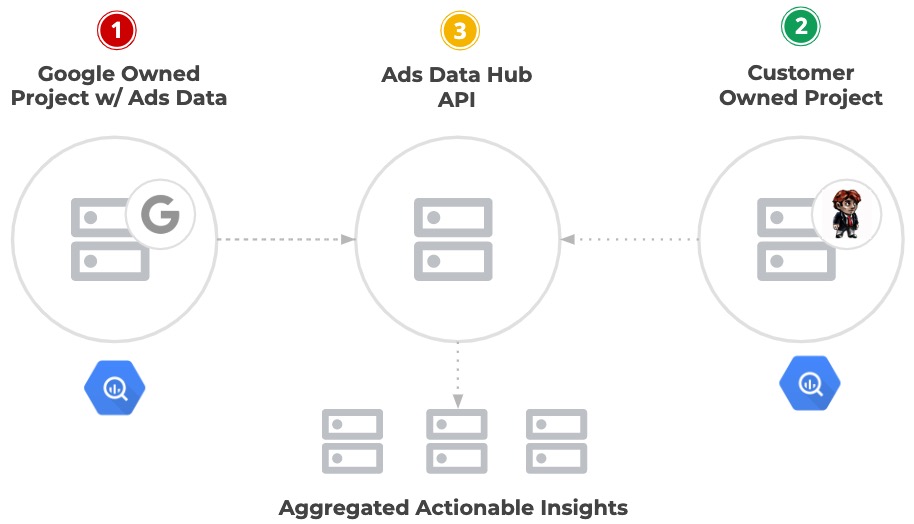 The first is a BigQuery project of Google. You remember the impression data that we could not obtain since the log transfer could not be done after GDPR, right? That data is in this project.

And the second project belongs to us. And all the data for all our marketing activities in the Google universe is here. It is of course almost all click-based.

The last step, Ads Data Hub, is an API that allows us to query the data on these two different projects together. In this way, I am able to query all the events in my project, such as click and conversion, together with their impression data, and I can see, for example, which impression affects the customer journey of which conversion.

If we detail these 3 steps;

2 – Google teams cannot access our BigQuery project. Our project can contain all kinds of online and offline data. And the data we receive as a result of the queries we make through the Ads Data Hub is also kept in our own BigQuery project.

3 – Ads Data Hub queries are technically no different from BigQuery queries. However, this query is done through the API. Before making the query, it is useful to test our query in BigQuery sandbox mode. We can also visualize the data we obtained after the query through the Google Data Studio. 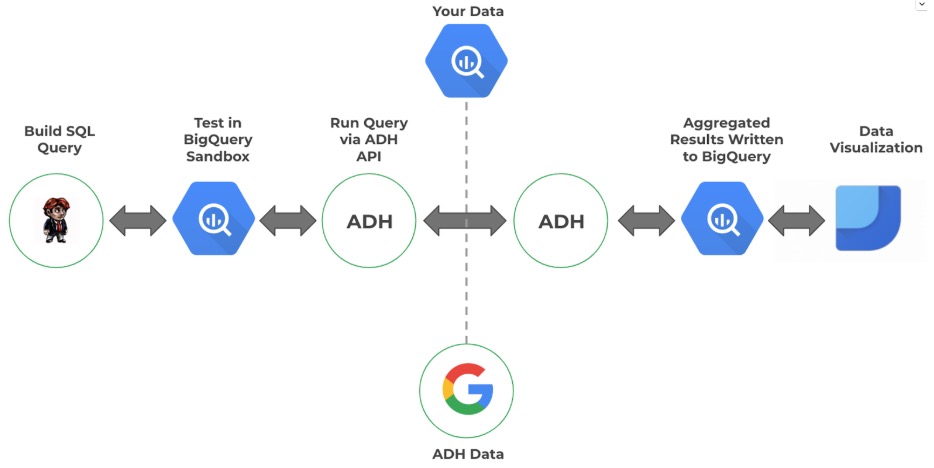 So let’s ask that critical question; “If GDPR has banned the transfer (singularization) of log data, how does Google break the ban? While it was supposed to break this ban, why not bring the data directly to us and make all sorts of stuff?”

Google’s solution is not on the contrary to the GDPR. It falls within the scope of the GDPR as much as possible to offer an impression based attribution.

For all the mentioned Ads Data Hub platform;

As a result, we can summarize the Ads Data Hub as a “BigQuery based Google project allowing us to obtain the data that will enable us to make an impression based attribution in a user-level, but not user-based manner.”

In addition to this, unfortunately, Turkey does not take place within the scope of the limited alpha Ads Data Hub for the moment. According to what you have read so far, we can say with peace of mind that “We are awaiting impatiently just like you do.”