One of the main features that differentiated Google ads and Facebook ads from each other about a year ago was setting the budget of relevant campaign at the ad set level (although it was at the campaign level in the Google ads). However, as a result of the technical improvements made a year ago, the Facebook team has provided to the advertisers a service where the budget is set at campaign level and, if requested, where it is possible to create a bid strategy at the ad set level.

Accordingly, Facebook advertisers had the opportunity to place an ad in the layout they are used to by defining a budget (daily or lifetime) at the ad set level, or to set a budget at the campaign level. With this feature, the advertisers will no longer have to make a separate budget forecast for each ad set, and the budget allocation will be optimized by the system to convey the investment to an ad set that works better thanks to Facebook’s algorithm.

How is Campaign Budget Optimization Established?

In order to use the campaign budget optimization feature, you need to have a plan to set up multiple ad sets. When you start to create your campaign, you must turn on the “Campaign Budget Optimization” button after selecting the relevant purchase method (Auction – Auction or Access and Frequency – RF) and the objective. Then, you must define the daily/lifetime budget. (It is important to note that when the daily budget option is selected here, you can spend 25% below or above the amount you specify, and the lifetime budget will not exceed the budget amount in any way.)

It is important that this method should not be confused with A/B Test. Facebook does not select a winner among the existing ad sets; it allocates the budgets ensuring that the budget is lower or higher according to the performance of the ad sets throughout the ad flow. In fact, we are familiar with this system where there’s more than one ad in a single ad set: budgets of different ads within the ad set is similarly allocated according to the performance of the relevant ads.

For some objectives, it is possible to manage the budget allocation using the bidding strategy feature at the ad set level. It is also possible to define a minimum and maximum budget for daily spending under “Ad Set Spend Limits” at the ad set level. However, Facebook does not recommend setting a maximum limit. If you do this, an ad set with a good performance will spend up to the maximum, and even if the ad set’s performance is good, it will not achieve its potential success as the spending is limited. Instead, if you especially want the performance of one or more ad sets separated from others, you are suggested to take into account using the bidding strategy primarily.

How Does the Campaign Budget Optimization Work?

In order to explain this, let’s take a look at the example published by Facebook. Let’s say you have three ad sets and you’re planning to spend $10 for each set. 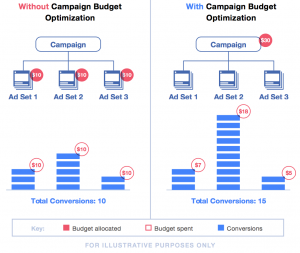 We do not know if the system works exactly like this, but it is obvious that its contribution to the efficiency will be high when such a structure is established.

While making these statements, Facebook emphasizes that you should draw attention to the campaign level performance, not at the ad set level when you report the process.

This structure is available for all the objectives. However, the bid strategies offered as an alternative in each objective differ from each other. In the following table, we summarized which bid strategy you can select for which objective. 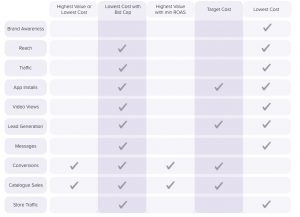 While ending this article, we would like to underline the fact that many bloggers suggest that tests should be carried out in advance in order to better manage the impact of the change in the system in September on the ad performances.